Live a unique experience in the heart of volcanoes with this great hike from Sancy to the Chaîne des Puys.

100 kilometers, a 3-day walk, 4450m climb: in the footsteps of the XGTV participants with whom you share the journey, you set off for a human & sporting adventure in an exceptional landscape, a return to the sources, nature and the origins of the trek.

Please note: because of its difficulty, this trek is aimed at an informed public, trained and experienced in walking for several days.

Between the southern foothills of Sancy and Volvic, the Chaîne des Puys – Faille de Limagne, UNESCO World Heritage Site, offers the discovering of many lakes, summits, ridges and vast wilderness: a concentrate of the most beautiful jewels of the Auvergne volcanoes natural regional park. 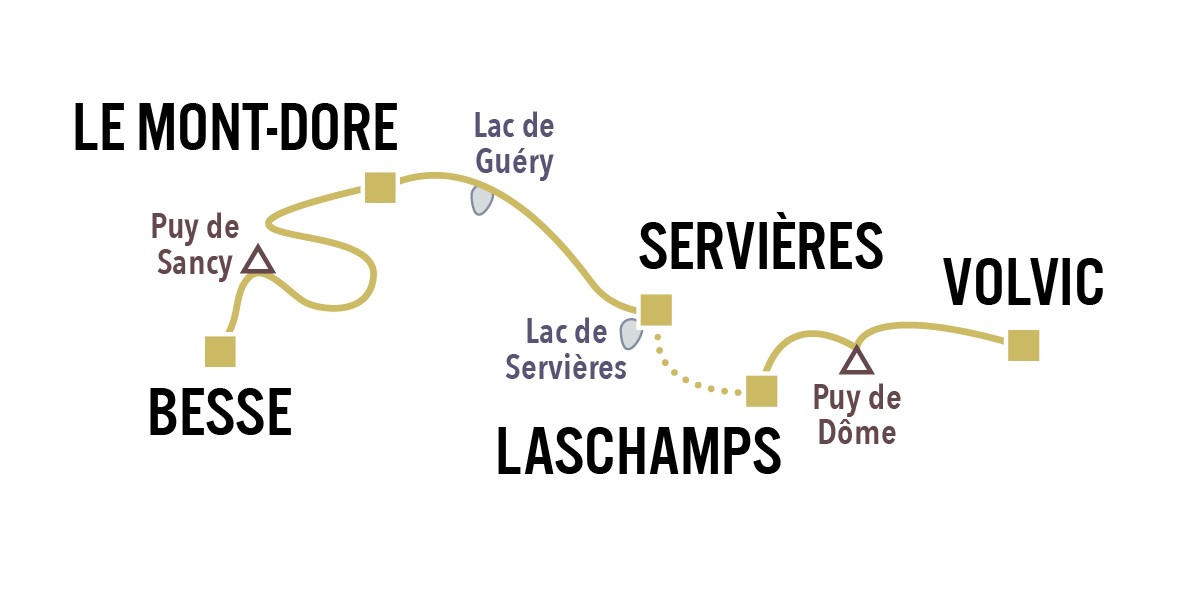 Withdrawal of bib numbers, verification of bags and instructions: Tuesday May 19 from 4pm to 8pm at the Parc de la Source in Volvic (old factory). The bags will be checked (the list of compulsory equipment will be provided later) at 4:30pm, 6:30pm or 8pm.

Meeting in Volvic and transfer to the start of the hike (time to be defined). Departure from Besse following the small valley of Couze Pavin, then climb towards Puy de Chambourguet dominating the station of Super-Besse. Climb to the Col de Couhay and the Puy de la Perdrix. Descent into the protected ice valley of Chaudefour to climb up to the Puy de Cacadogne and the Col de la Cabane. Passage at the top of the Puy de Sancy (1885 m), the highest point of the Massif Central. Descent along the Sancy ridges via the Pas de l’Ane and the Tour Carrée, the Puy de Cliegue and the Capucin. Stopover at Mont-Dore in a lodge.

Departure from Mont-Dore to the Grande Cascade and the col de la Croix St-Robert. Magnificent route through the ridges of the puys of Angle and La Tache before descending towards the Dordogne valley via the Rossignolet and Queureuilh waterfalls. Then climb to the Banne d’Ordanche and the Puy Gros, crossing of the table mountain to the Lake of Guery. From the Col de Guéry, climb towards the Puy de l’Ouire and the Puy de l’Aiguiller before going down to the lake and the lodge of Servières for the stopover.

Transfer after breakfast to the Château de Montlosier, home of the Auvergne Volcanoes Regional Park (15 minutes), to join the VVX race route. Walk in the middle of the volcanoes via the Col de la Ventouse, the Puy de Vichatel, at the foot of the La Vache and Lassolas puys, before descending towards Laschamps. Climb towards the Col de Ceyssat, then ascension of the other giant of Auvergne, the Puy de Dôme, by the muleteer track (Le sentier des Muletiers) on the south side. Descent northward to the puys of Come and Pariou, the Chopine and the Caves puys, puy de la Coquille, ending through the puy of the Nugère before arriving in Volvic. In the evening, award ceremony, meal offered by VVX to the trek participants, musical entertainment with the band Flying tractors.

Registration does not include:

This trip is organized by Chamina Voyages, the number of places is limited to 15 people. Registrations will be prioritized in order of arrival and closed on April 20 2020. A minimum number of 6 participants must be reached to confirm this trip.