Located in the heart of a region shaped by volcanic eruptions, Volvic is a town of almost 5,000 inhabitants. Today, it is internationally known for the purity of its water. In the past, however, it was famous for the durable, grey stone that was quarried there beginning in the 12th century.

The town has a charming diversity of attractions: narrow streets lined with stone buildings, fountains, a feudal château, a Romanesque church, a museum, and more! They all attest to long-standing artistic and artisanal traditions. The commune, which covers nearly 30 km², includes 17 towns and is one of the entrances to the Auvergne Volcanoes Regional Nature Park. A popular destination for both amateur and professional athletes, Volvic is at the centre of an exceptional landscape that has been carefully preserved. This preservation has been possible through the creation of a regional nature preserve and a natural space as well as through the protection of the water catchment area.

Since the beginning of the century, the stone quarries, the Société des Eaux de Volvic, and Michelin have attracted workers from Italy, Spain, Portugal, and Turkey. They have successfully joined our community while maintaining their rich cultural traditions. The commune is incredibly dynamic thanks to its high-quality sporting and cultural infrastructures, the close-knit community, and the presence of shopkeepers, artisans, and business people. 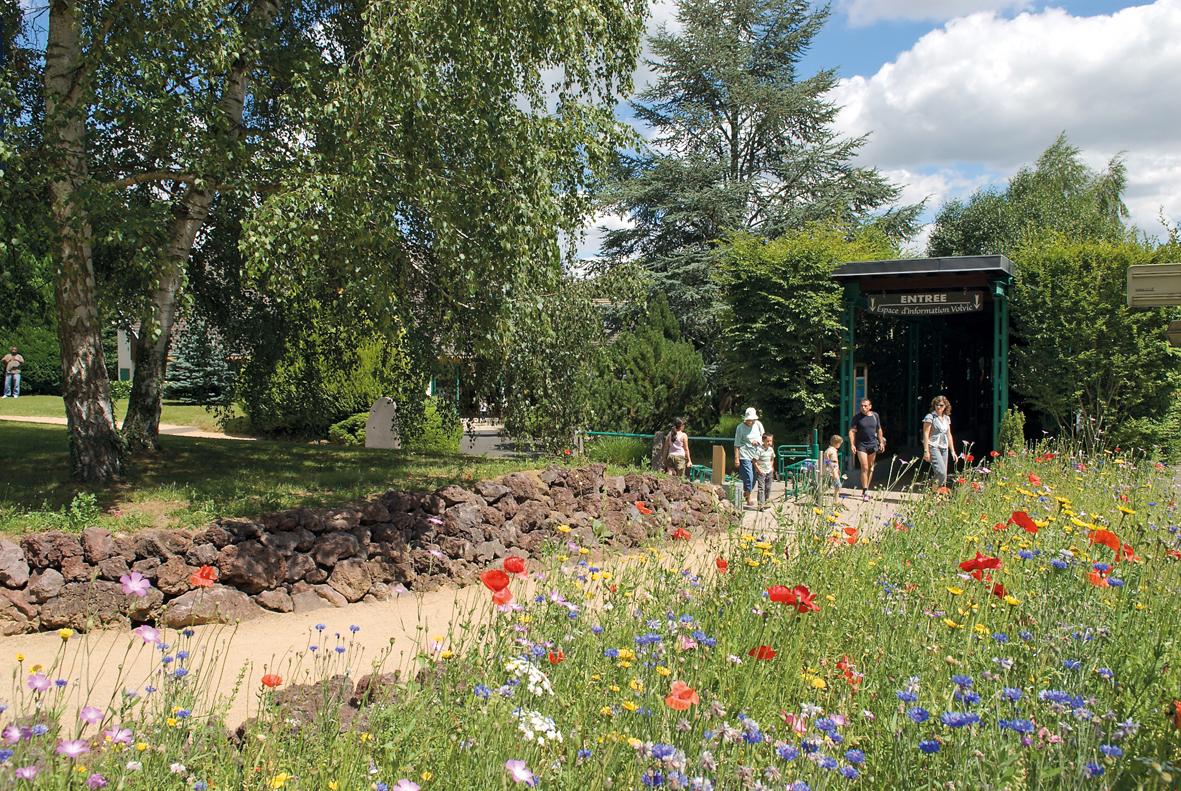 Goulet: A Site Filled With History

Goulet, the largest industrial site for collecting natural mineral water, is the entrance to the Volvic water catchment area. This area extends across 38 km2 and collects water from rainfall and melting snow. At the heart of the Auvergne Volcanoes Regional Nature Park, Goulet still has a low population density and is mostly covered with forests and heath.

A Bit of History

At the turn of the century, water was rare in Volvic. In 1889, the pioneering Mr Legay Chevalier was the first who sought a steady water supply for the town. However, his efforts were in vain since he did not find enough water.

In 1925, the inter-communal trade union for Riom, Volvic and Châtel Guyon began digging a tunnel next to what is now the Goulet factory. This time, the efforts were successful and they found a very high-quality water source. This was in 1927. With the water from Goulet, Volvic no longer had any shortage of water.

In the 1930s, people began bottling the water. Then, in 1951, a hydrologist engineer named Louis Claude Vincent bought the business to continue bottling, selling it to Sellier Leblanc in 1955. New facilities were then built for collecting and bottling the water. The business soon took off and Pierre Letrilliard became the CEO. In 1960, the Société des Eaux de Volvic was founded.

In 1961, the search for a spring on the company’s land began. The Clairvic spring was found at a depth of around 100 m.

A sample of the water was analysed by the Clermont-Ferrand hydrology laboratory, revealing it to have even higher levels of minerals and trace elements than the Goulet spring. These encouraging results lead the company to request the water be certified as natural mineral water. On 6 October 1965, the Clairvic spring was awarded the label of “natural mineral water” by a decree from the Ministry of Health in conjunction with the Académie de Médecine.

As the brand continued to grow, a new bottling plant became necessary and was built in Chancet in 1973. All production activity progressively transferred to that site.

While the Goulet facility no longer plays a role in the production, the site of the Volvic spring has become a place for hiking, relaxing, and exploring nature. As visitors wander the preserve, they can take in the freshness of the air in the woods and enjoy the sports facilities which include a fitness trail, an orienteering course, and hiking paths.

At the edge of the preserve, the Information Centre reveals the secrets of Volvic natural mineral water. It explains how the water is located 100 m underground, protected by 6 layers of volcanic lava, until it is bottled so as to preserve its original qualities. Visitors can also find out about the expertise and atmosphere that the Société des Eaux de Volvic hopes to share. In particular, visitors can learn how protecting the environment, preserving natural resources, and using environmentally-friendly designs are at the heart of our concerns.

This quarry, which has been in use since the beginning of the 20th century, was purchased by the Société des Eaux de Volvic as a way to preserve the site. It was converted as part of a programme with the Auvergne Volcanoes Regional Nature Park: the carved-out face of the quarry was kept, and the floor of the quarry was replanted to accelerate recolonisation by vegetation.

Two types of materials are ejected by this compound volcano:

The volcanoes in Auvergne were discovered relatively recently, in the 18th century, even though local residents had been mining volcanic rock since the 13th century.

The volcanic materials from the Puy de la Nugère (e.g., lava flows, ash, and cinders) helped create the mountains and also covered the Volvic valley, sometimes under as much of 100 m of volcanic debris.

Precipitation that falls over the Chaîne des Puys naturally filters down through these permeable or cracked layers until it reaches the impermeable granite bedrock.

The water then follows the outline of the former valley down towards the plains.

This slow percolation, combined with the forests covering the catchment basins and the minimal human activity in the area, is what makes Volvic natural mineral water so pure. Since the water is collected at a depth of 90 m, its purity is perfectly preserved.